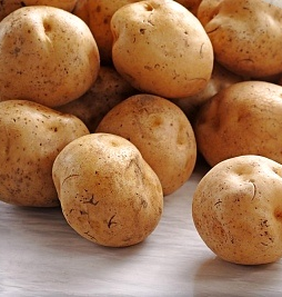 Potatoes, friend or foe for Inflammatory Bowel Disease
Potatoes have been the basic food for millions of people around the world for generations. Science is now suggesting that they may not be good for everyone.

If you have any sort of Inflammatory Bowel Disease (IBD) then it may be a good idea for you NOT to eat potatoes. Here's why.

A few weeks ago I wrote a couple of articles about the alkaloids in plants. These protect the plants against fungal disease, parasite attack and bacteria.

Catch up here for the background and here.

Now scientists have found that there is a connection between people with IBD and potatoes, especially fried potatoes. Scientists are like detectives. They keep looking for signs, symptoms and details, and look at lots of statistics before they come to their conclusions.

If you have any connection to a garden and your grandparents grew potatoes as many did, you may know that the stems and leaves of the potato plant are poisonous. Well the same poison is present also  in the skin of the potato and in the outer layer of the potato near the skin. This is why it is always a good idea to peel your potatoes.

Glygoalkaloids are the little culprits that irritate the bowel of sensitive people with Crohn's disease or Ulcerative colitis. You will see in my previous articles that I talk about the connection between potatoes and inflammation. Well it is also inflammation in the bowel.

Therefore it is a good idea for anyone with any sort of Inflammatory bowel disease to avoid potatoes and any of their relatives. This includes tomatoes and eggplant. When you are thinking what to eat, you have to be your own detective. Potatoes also includes hot potato chips from a fish and chip shop, and potato crisps from the supermarket. It also includes mashed potatoes and potatoes in a pot of mashed vegetables.

Email ThisBlogThis!Share to TwitterShare to FacebookShare to Pinterest
Labels: Health, Nutrition, Our Body